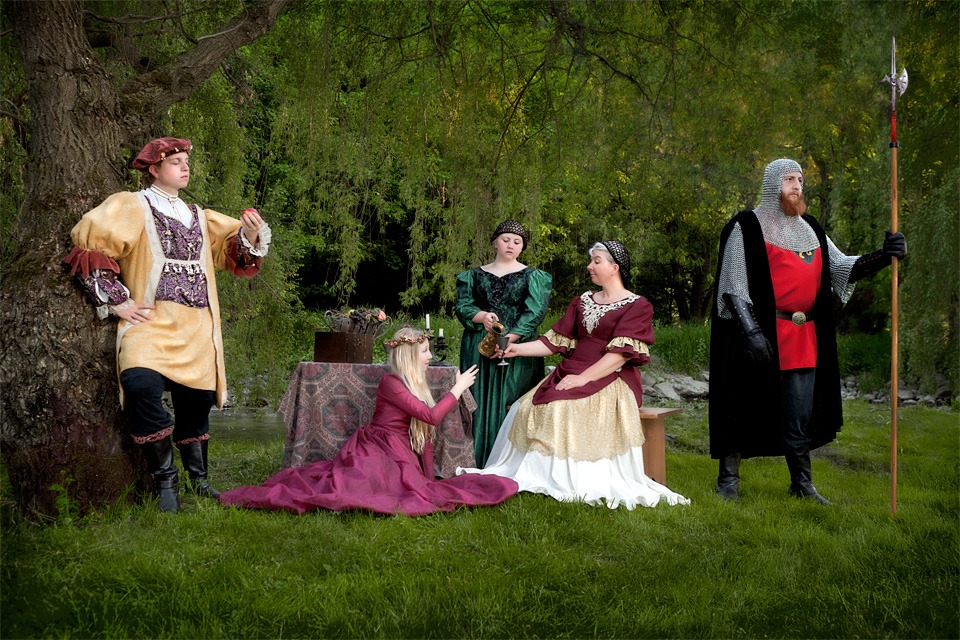 The Oxford Renaissance Festival is one of those times.

Coming June 14-16 in Woodstock, ON, ORF promises to be a weekend of thrilling Medieval re-enactments, Celtic music, performance artists, jugglers, entertainers, food and fun. The line up looks fantastic and, as per ORF’s site, promises:

The Joust! The Knights of Valour and crew (Featuring Shane Adams, as seen on Full Metal Jousting on the History Channel) revive the original extreme sport of Realgestech jousting. Two knights in full plate armour charge down the list at full speed aiming to knock each other off their steeds. The collision is like a force of a car crash. Here’s to lances that break, and bones that don’t!

Comedy! Come and see the Splatter Time Players’ hilarious Mud Show. For those unfamiliar with such an event, the show is performed in a knee-deep mud pit and since audience participation is a key part, mud is often splattered out towards spectators. A less grimy option for a comedy show would be Men in Tights. Another show based on audience participation, they retell fairy-tales and Shakespeare with a bit of a twist.

Amazing Performers! Experience the awe of a fire-show by Illuminair Entertainment. A blend of acrobatics and fire-handling, it is sure to impress. Amazing? No, just adequate. Zoltan the Adequate, that is. Fire-eating, sword swallowing, and other side-show acts are his game, all while presenting hilarious commentary. Interact with the various wandering actors and characters around the grounds.

Authentic Re-enactment! Watch the birds of prey as they swoop down at a target and learn more about the practice of Renaissance hunting with Dale Gienow of Chivalric Productions.  Feel the intensity of a medieval battle as the Knights of Blackthorn duel one another in full suits of armour.

Live Music! We have something for every taste. Hear the authentic sounds of Eastern inspired bagpipe music and enjoy the Belly Dancers entertainment with Cu Dubh. Dance a jig with Stone Clover, a celtic-style folk band. Sing along to traditional vocal music in the Boar’s Head Pub with Nero’s Fiddle. Hear the soaring voice of Victoria Gydov, a classically trained soprano and enjoy the whimsical ukulele music of JoJo Worthington.

Interactive Games! Lots of games to entertain all ages. Dunk-a-Wench (dunk tank), Castle Siege (catapult target game), and the Gladiator Arena (participants duel in a padded arena with helmets and lances) are just a few of the fun-filled games to try.

Lots of Vendors! Jewelry, costumes, swords, armour, leather work, trinkets, and souvenirs. All can be found at the over 35 booths to peruse.

Great Food and Drink! Try a mug of our very own Oxford Renaissance Festival “Mead of Honour” Honey Beer, or other ales on tap in our licensed Boar’s Head Pub Beer Tent. Soft drinks and water will be available for a modest price as well. To get the full culinary experience, be sure to try a Dinosaur Ribs and a giant pickle on a stick. For those less adventurous there is more modern fare served by local restaurants.

All-in-all, it’s going to be a weekend to remember.

Of course, I’ll be there, as well. In conjunction with ORF, I’m giving away five Fantasy Portrait sessions to the best costumes worn to the festival, as well as capturing all of the exhilarating goings-on over the course of the weekend. Make sure to stop by my display at the information tent and say ‘hi’.

If you are already planning on attending (and, really, why wouldn’t you?), visit my Facebook page for a chance to win one of two pairs of free tickets. All you have to do is ‘like’ the page, tag yourself in the promo image and then share it on your profile. The draw for the free tickets will take place on Monday, June 10.

See you at the Faire!

A Picture Is Worth A Thousand Words

The Guy Behind the Lens

On This Day, Remember