My calendar told me that today is the first day of spring and winter is over.

Of course, looking at the snow on my lawn and feeling the arctic breeze caress my cheeks like a slap in the face, I find it difficult to believe that the calendar even knows what year it currently is. Spring conjures images of fresh flowers, sunny days and warmth – not another soul-sucking round of Old Man Winter’s acerbic sense of humour.

This, then, is one of the issues I have with the winter months. When I was a young ‘un growing up in Ottawa, winter was a wonderful time. Every weekend was skiing in the Gats and every other free minute was spent skating on the world’s largest rink, drinking hot chocolate and eating Beaver Tails from little wooden skate shacks dotting the Rideau Canal. Living in London, many years and many more grey hairs later, the prospect of spending any amount of time outside between December and March is about as appealing as a trip to an amaurotic dentist with the shakes.

Unfortunately, I also love shooting landscapes and ruined structures. In the summertime, it’s the easiest thing in the world to hop in the car, crank the tunes and head off to one vista after another. Technically, it could be that easy during the short days of hypothermic Hell-on-Earth, but the inconvenience of winter clothing, desolate pastures and driving through blizzards and freezing rain have thus-far deterred me. Really, though, I was just making excuses to stay on the couch.

I vowed that this year would be different. After 16 weeks of pattern procrastination, I finally headed out during winter’s final week to see what there was to shoot. The first target of my search was an abandoned house along the Talbot Trail, just south of Chatham. My GPS and I had to redefine our relationship on this little trip but, after the digital dimwit bowed to my will (I threatened to toss the sucker out the window), I found exactly what I’d been looking for. Cool place and worth the trip. 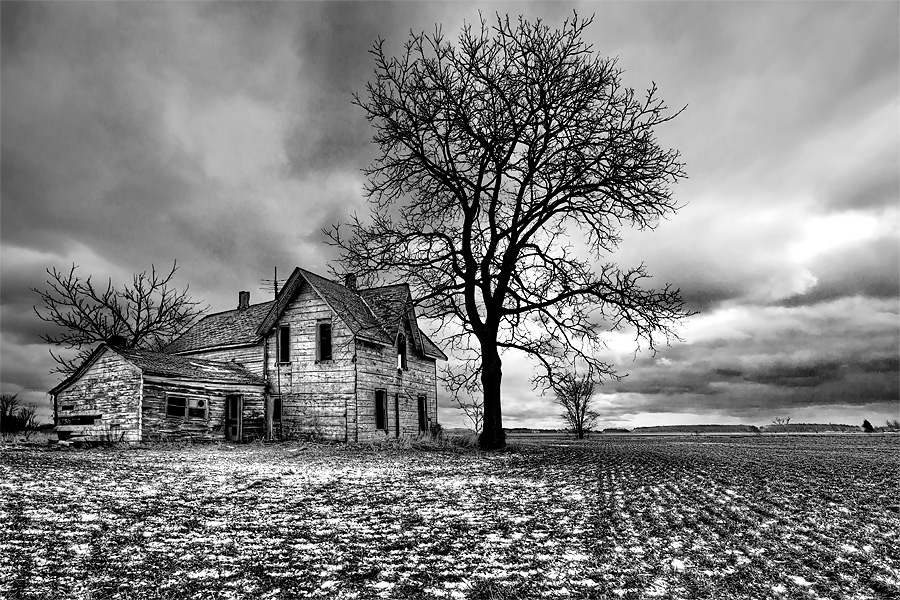 I followed up on this small success with a longer jaunt further east. Having recently seen some great shots of some decaying dock pilings on the western shores of Lake Ontario, shot by my friend Kevin Pepper of the Photographer’s Lounge, it was off to Grimsby on a snowy, blowy Friday morning.

I was on a roll now! Having stared OMW down and sent him scurrying back to whatever frozen backwater he crawled out of had me in good spirits. Now, there was only one thing left to do: being so close to Hamilton, it as only natural to stop in at a few of my favourite waterfalls and see how they looked under ice. Sherman Falls was fair but also fairly unimpressive, so it was off to Tiffany Falls to see if things were any better.

While there wasn’t quite as much snow on the ground as I would have liked, the giant icicles – coloured rusty-red and arctic-blue from the minerals leaching out of the ground – added some interesting character to the landscape. 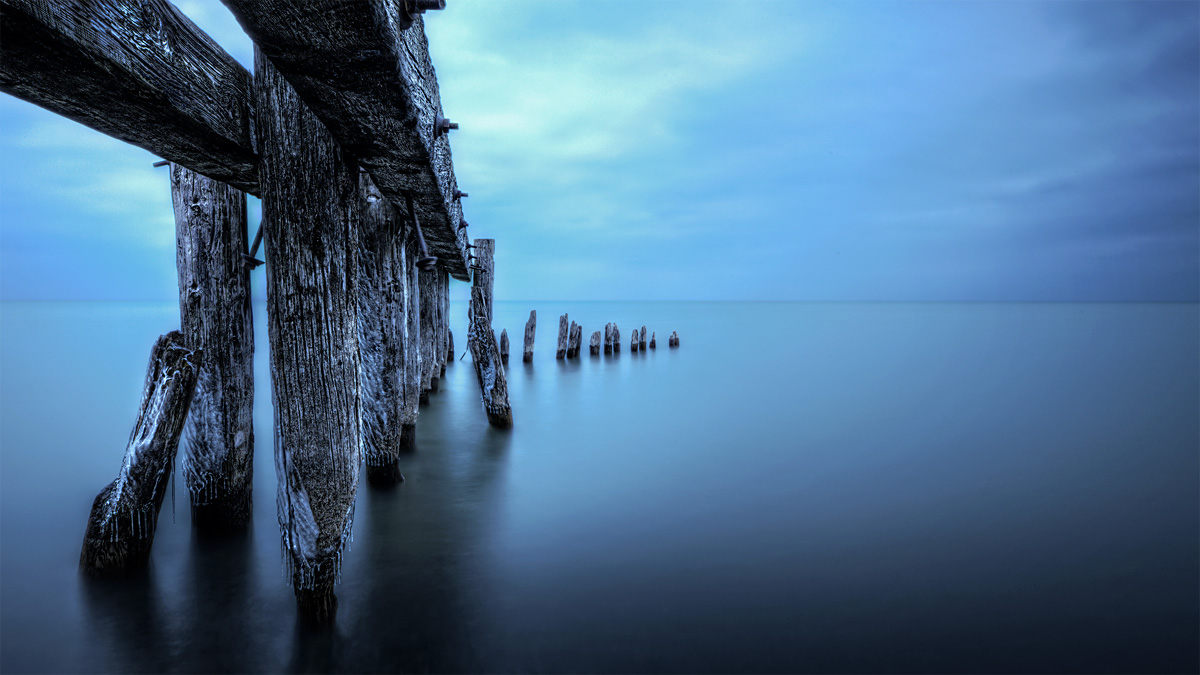 It was cold but not too cold. Snowy but not too snowy. Sure, the overall experience lacked the warmth and carefree-ness of outings in the summer months, but it was far better than I initially thought it would be. It turns out that there really was no reason to avoid it for so long (other than blizzards, icy roads, layers of restrictive clothing, frozen fingers and triggering mild a Burt’s Bees addiction but, hey, all of that’s really just an excuse to watch tv and eat pizza, anyway … right?).

Ultimately, my foray into winter’s little wonderland was successful enough to motivate me to shoot this time of year a little more often. Sadly (ha! “sadly” … that’s a good one), this winter is almost over. Soon enough, it’ll be green shoots and cargo shorts, warm breezes and cool, tasty drinks. Soon enough, it’ll be back to shooting landscapes in the relative comfort of sunny, summer days.

At least, that’s what my calendar is telling me …